He started life at the NSW EPA, then joined CDS Technologies, that was acquired by Rocla, he did a short stint with a consultancy and a council then started Optimal Stormwater in 2009.  He has a degree in chemical engineering and an MBA.  He is presently General Manager at Optimal Stormwater.

Murray has previously held the role of Vice President for 5 years, Secretary for 5 years, and President of Stormwater NSW for 3 years.  He is known as being one of the 4 people that went to the minister in 2005 and got up the Stormwater Management Service Charge that provides millions of dollars in funding into each of the NSW Councils, and most recently he has championed the finalisation of the Guidelines for the Maintenance of Stormwater Treatment Measures.  In 2014 he was acknowledged by his peers with a commemorative cricket bat nominating him as one of todays most influential people in Australian Stormwater.  And he’s very proud to be the only person to have received TWO Stormie Awards, and StormwaterNSW has just awarded him life membership.

Murray has been a driving force in Australian stormwater for the past 28 years, and during that time has designed over 5000 GPTs (and other stormwater treatments), but these days is better known for his famous yellow jacket that he wore when doing the webinar on the new Guidelines for Engineers Aust and Stormwater NSW.  He is a staunch advocate for maintenance of all stormwater treatment solutions, and will be running multiple training courses to educate users how these new Guidelines will work.

He has a saint of a wife that now also knows where just about every trap is Sydney is located, plus a 16 year old son and 13 year old daughter.  In his spare time he can be found fishing, mixing a few tasty cocktails…… or with his head down a drain somewhere!  He’s a passionate stormwater professional and a significant contributor to the industry and to StormwaterNSW 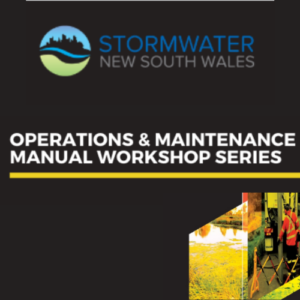